Placing horse power at the heart of sporting events, fairs, exhibitions and other events

Each year brings with it the opportunity to put forward horses at a number of local, national and international events. For the time being, these shows are mainly centred around horses, but horse power can also be part in other types of event.

The presence of horses, donkeys and mules in such a context has several advantages 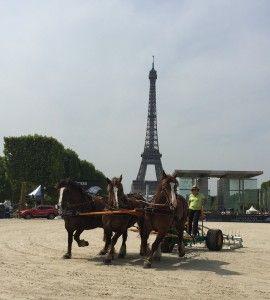 Equines do not consume fuel, and also generate very little indirect emissions (there are equines everywhere so little transport is involved, and producing their food generates fewer hothouse gases than that of standard vehicles…)

People will stand aside more willingly for a horse, and will generally do so with a smile. The public comes towards the handlers and communicates with them.

The air is cleaner, and there is no noise pollution. The equines are pleasant to look at and convey a friendly impression. They turn into an additional entertainment.

These experiences were an opportunity to validate the appropriateness and efficiency of the chosen events, to think about improvements, and about new ideas for the development of horse power at the service of both the general public and organisers.

Two types of transport were on offer:

– Shuttles: In Paris, a carriage took visitors from the metro station to the competition site and vice versa, whereas in Bordeaux, several routes were offered by three carriages, from the campsite near the event, the bus and tramway stop, and the parking lot.

– Drives: In Paris, the carriage made a detour from its route to go as far as the foot of the Eiffel Tower.

All of these transports were handled with covered carriages that could hold between 10 and 30 people, pulled by pairs of draft horses: Bretons, Percherons, Boulonnais and Comtois. 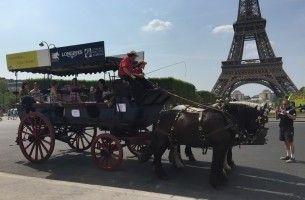 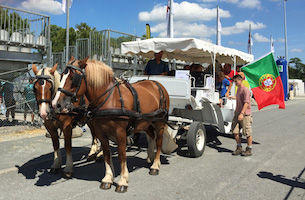 Whereas the shuttle proved to be more useful in Bordeaux, all of the drivers of these horse-drawn carriages received positive input from the public. In Paris, those who rode the carriages, children and horse-lovers, were delighted with their drives. In Bordeaux, the shuttles were full and fans would wait for them at changeover points, sometimes even bearing gifts for the drivers.

Various users of the road adapted themselves without any problems (not forgetting that traffic regulations stipulate that horse-drawn carriages should be considered as normal vehicles so that, for example, they are not allowed to overtake if there is an unbroken line in the middle of the road).

The surface work on the arena was done during the day using a harrow pulled by draft horses. A special forecart was designed by the builder Vitimeca. Three Breton horses abreast are needed to pull this forecart with the harrow. This equipment made it possible, in both cases to smooth the track in a maximum of 10 minutes between competitions or matches (the two tracks in this case were of approximately 55 by 60 metres for Paris, Eiffel and 30 by 80 metres for the Horse-Ball).

In addition, during the European Horse Ball Championships, two pack donkeys were used to pick up manure between matches.

At both events, donkeys were used for the maintenance and cleanliness of the alleyways, as well as all the space within the event site. Carrying packs, they could collect the litter bags put in place for this, and also any litter on the ground, using special clamps. They were able to move in the crowd and between the stands without any problem. They went out three to six times a day for between 30 minutes and one and a half hours, and removed between 431kg and 614kg of waste at each event. In Bordeaux, the donkeys and their handlers were the only ones collecting litter, so they were entirely responsible for the cleanliness of the alleyways, the stands, boxes, trade stalls and VIP stands. 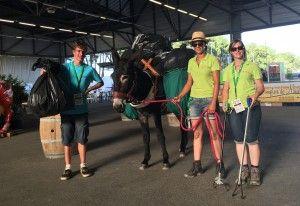 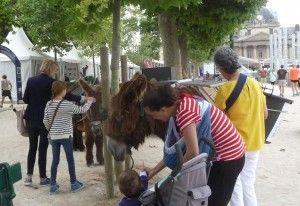 The fact that the service providers were on-site permanently during opening hours and a little before made it possible to adapt themselves to the rate at which the rubbish bins would fill up, as well as to how quickly the ground would be littered. What had been noticed previously at other events (Sommet de l’Elevage in Cournon and Salon du Cheval in Paris) is that users are more respectful in terms of cleanliness when donkeys are in charge: there is less litter on the ground, and people tend to deposit litter directly into the donkeys’ packs.

In Bordeaux, plastic containers were provided to restaurants and people in charge of building maintenance (offices, toilets). These containers were then carried outside the site by a regional horse hitched to a forecart. So trucks did not have to come in and collect them and all litter was removed solely using horse power.

The same horse was also used to keep the alleyways and spaces around the site clean, pulling a trailer in which all the manure found on the ground was collected.

With experience being built up, the different services under study are improved. The equipment is better adapted and the know-how evolves. So, more and more efficient services can be offered. With research and experience, this can also be taken further. For example, worksites can be entirely maintained by equines: it is necessary to think further on the equipment so that the animals can carry out this work, which is longer and more demanding in terms of effort.

It is necessary to think about new services. For example, at a show-jumping competition, a pair of hitched horses could help in building and taking down the courses. Working equines could also be used on sites which cannot be accessed by motorised vehicles to supply refreshment stands, and the equipment…

There is also a place for working equines in non-equestrian events. They can be housed in mobile horse boxes on the site or nearby, as is the case for the Paris Eiffel Jumping where they are housed at the nearby Ecole Militaire. The only thing they need on-site, between jobs, is a rest area with a paddock and water. They do not create a mess since there are manure bags, and they can move about along set routes.

SFET will therefore shortly publish a catalogue of services created by its laboratories, which can provide horse power for any type of event.