All od the techniques which use horses to cultivate vineyards

The Advantages of Wine-Growing With Horses

The main advantage of this technique lies in the highly precise nature of the work that is carried out, during which each row and each vine are dealt with almost individually. Working with horses in vineyards also ties in to the sustainability of the soil in order to bring value to the “terroir” and in operating in plots which are difficult to access with tractors (terraced plots or very sloping plots, for example).

One of the biggest strains in using mechanized traction to work the land is the compaction effect. The more the soil is ventilated, the more vulnerable to compaction it is. The tilling irons on motorised vineyard tractors are generally located just behind the front wheels, just in front of the rear wheels. The work is of good quality, but it is immediately compromised when the machine’s rear wheels pass over it. That causes a highly compacted “plough pan”. There is another set of teeth behind those wheels that try to negate this compaction, but they are not 100% efficient.

This type of plough pan has several disadvantages:

Working with horses thus avoids putting in place these plough pans. And if it is indeed true that the pressure upon the soil exerted by a moving horse is greater (per square centimetre) than that of a tractor, its bearing surface is almost zero. What is more, the work tool is behind the horse which will reverse any compaction caused by its passing.

The Biological, Chemical and Physical Life of the Soil is Brought Back to Life. The agricultural potential of the soil is better harnessed.

With a ventilated structure, the excess run-off rom rain is limited. The soil is ready for better water penetration, which makes it possible to build up in-depth reserves.

Lastly, working the soil with horses creates a soil structure which is much better suited to the health of the vines which have a root system that digs deep. Its water supply is better. The vines are more vigorous.

The horse makes it possible for the wine-maker not to use any chemical weedkillers. In effect, with the “inter vine” tools that are fixed on the ploughs, complete weeding of the soil, even at the foot of the vines, is mechanical.

Depending on the region, the pricing of the service providers ranges from €35 to €65 per hour before tax.

Some people prefer to be paid by the surface that is worked rather than by the hour.

Work using animal traction is generally carried out in “human-scale” wineries with small acreage and a concern for respecting horses, people and the land. The pace of the horse slows down man, forces him to take his time, and to adapt himself to the land.

Using animals instead of machines changes the perception of work, with the horse becoming a work partner rather than a simple work tool.

Wine-growers often praise the return of silence, the smells, the rustle of the soil as it opens up, the clinking of the tools on the hitch.

The wonderful relationship between people and horses manifests itself in the emotion we all feel when we have the opportunity to get close to a horse or to hear a story related to them. 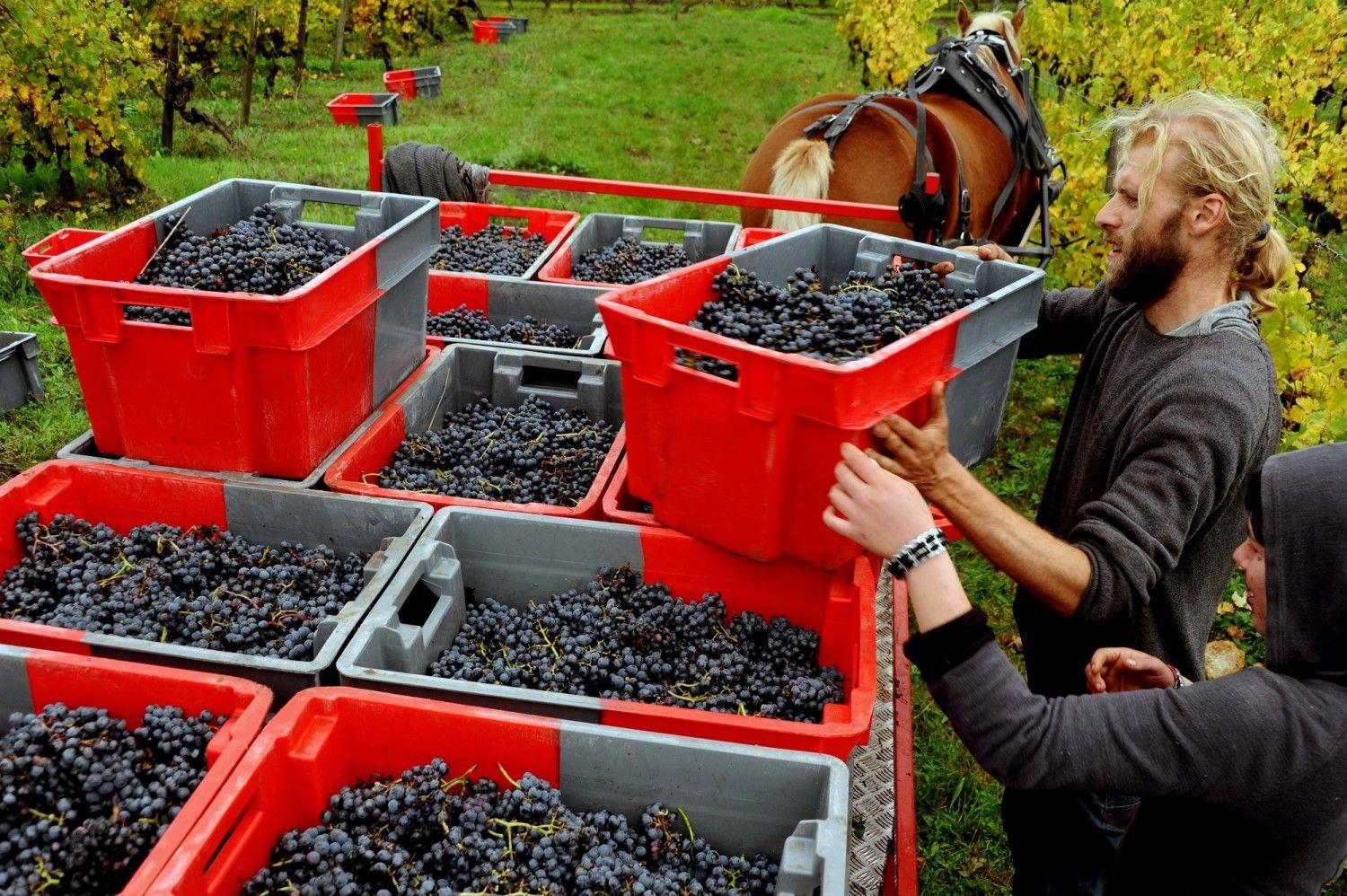 Animals eliminate soil compaction, which leads to a biological activity ratio for the soil of 40%, with very little reliance on water due to the quality of the soil.

Some examples of work done using animal traction (to be adapted depending on the nature of the soil and the topography.

For More information about : Wine-growing with horses