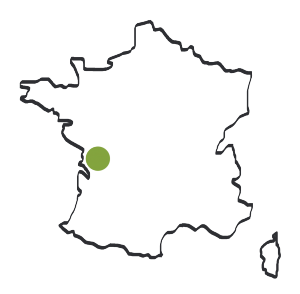 It seems that the Poitou donkey first appeared in the 10th century in France. The Poitou mule breeding industry, which flourished particularly from the 17th to the 19th century, gave a solid reputation to the donkey as a procreator, and it was widely exported to many countries (America, Mediterranean countries etc.) before seeing both domestic and overseas markets rapidly disappear after the Second World War..

Originally, the cradle of the breed was located in the Melle area, in the Deux-Sèvres department. But the Poitou donkey was in fact bred all over the southern part of Deux-Sèvres (In 1884, when the stud book was established, 94 of the 160 stud farms that were recorded in the Poitou area were in that department), the western part of the Vienne department, the south of the Vendée, north of the Charente, and Charente-Maritime. Nowadays, its breeding extends to other regions in France and to a few foreign countries (9% of births in 2007).

In 1977, a survey commissioned by the Haras Nationaux (National Stud) carried out by INRA (the National Institute for Agricultural Research) concluded that the breed would disappear altogether before the end of the century if nothing was done to reverse current trends and ensure the reproduction and regeneration of existing stocks. Annick Audiot, who was put in charge of this work, could only record 44 Poitou donkeys, 20 jacks and 24 jennies, belonging to 14 owners.

The Parc Naturel Régional du Marais Poitevin (Marais Poitevin Natural Regional Park), the Haras Nationaux and the Mulassier breeding syndicate met in Paris in November 1979 and decided to launch a rescue operation, underpinned by the creation of an experimental donkey farm entrusted with genetic improvement and the improvement of breeding techniques, gathering traditions, and informing the public. 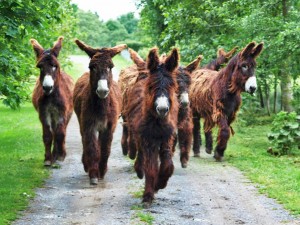 The Ferme de la Tillauderie (an old stud farm) in Dampierre-sur-Bourtonne, in the Charente-Maritime, was opened in January 1982.

Jointly run by the management of the Haras Nationaux and the Park, this establishment’s mission was to create an ongoing grading-up system which started in 1981.

A new census taken in 1997 by SABAUD (The association for saving the Poitou donkey) and SIRE (France’s central equine database) counted 291 pure-bred animals, all marked with forgery-proof electronic microchips and registered in Section A of the Poitou donkey stud book. Starting with births in the year 2000, foals must also be subjected to genetic filiation testing through DNA tests. In just 20 years, this spectacular comeback of stocks for the breed crowned the relentless efforts of the various partners involved in the conservation of this donkey who became the symbol of endangered breeds in France.

The Poitou donkey breed was recognized in 1884. 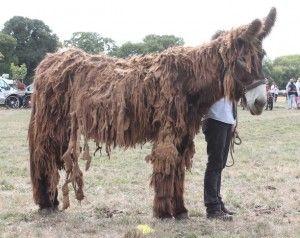 Brown to bay black, the hairs can get lighter to give a fern-like shade.

Underbelly and inside the thighs are light grey, but not going as far as washed out white.

Silvery grey with a reddish border around the mouth, the nose and the eyes. The coat must never be liver (with bunches of white hair) nor have a dorsal stripe (black line running from the withers to the tail), nor have a band across the shoulders.

Always selected to produce large mules, its value comes entirely from its role as a genitor.

However, whether driven, as a pack animal or ridden, the Poitou donkey also has many qualities, and its use has expanded a great deal since the year 2000.

Its large size is its major asset for riders, and its calm nature is much appreciated by beginners. Just as for the Poitevin draft horse, its unusual looks are a real asset for the tourism industry.

Its capacities in terms of endurance and traction are absolutely on a par with other breeds of donkey. 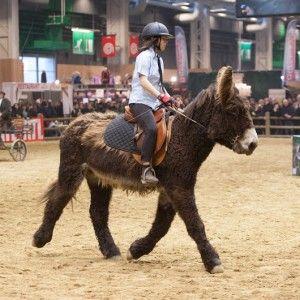 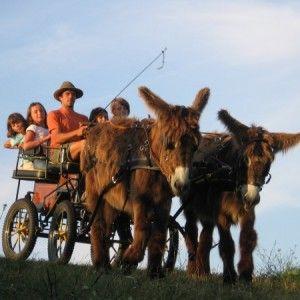 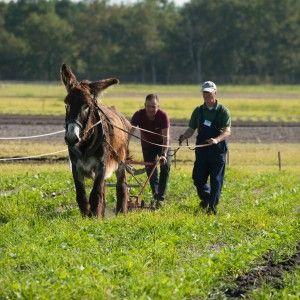 This hybrid, in principle sterile, is the result of the coupling of a Poitou donkey jack and a draft Poitevin mare. During the 19th century, the Poitevin mares in the Poitou were almost exclusively used for the production of mules. Breeders produced horses only when the mares could not produce mules. The most perceptive among the breeders, however, would put their mares to a Poitou draft stallion in their older years so as to conserve bloodlines. The giants among the mules was sold all over the world (something like 18,000 head a year were sold in the 19th century). Nowadays, annual production doesn’t go beyond about 20 head which are keenly sought in southern Europe. Since 2002, the “Poitou Mule” appellation has been recognised by the French Ministry of Agriculture. The animals born of an approved Poitou donkey jack, registered n the donkey stud book, and out of a mare registered n the Poitou draft stud book, are automatically entered into the Poitou Mule register. 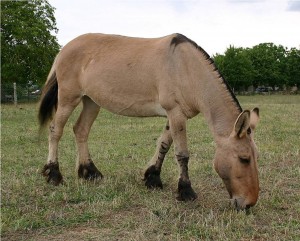 The Poitou mule is commonly between 1.60m and 1.65m at the withers but can reach and even surpass 1.70m.

The colour of the coat is usually handed down by the sire: solid black, black with whitish streaks, or all shades of bay. These are known in French, respectively, as “bouchard”, “boyard”, and “robin”. More rarely, it is the dam who transmits her coat colour: grey, red roan with or without a cross, red, yellow, silvery, rust or steel grey

The Poitou Mule’s head, which looks like that of the Poitou donkey, is large and long with very well-developed ears. The pyramid-shaped neck sports a relatively thin mane which is generally cut short so as to round and raise the neck and give it a more curved appearance. The withers are low. The back and loins are straight. The rump is sharp, short and sloping, The chest is broad. The ribs are flat and long. The shoulders are short, with little incline. The forearms are long. The muscles flat ad well-drawn. The fetlock is strong. The pastern is short. The articulations are well-developed and very lean. The foot is smaller than that of a horse, with a supple and very resistant horn. The tail is thin, with fine and few hairs.

Above all else, the Poitou mule is a heavy draft mule, particularly well suited to farm work and logging.

Its strength and endurance, along with its hardiness, few demands, and long lifespan makes this mule the perfect partner for traction professionals. Whether driven, ridden or as a pack animal, the Poitou Mule can also be a good partner for a leisure user looking for an unusual and multi-purpose equine that has a sweet disposition. Graced with courage and endurance, the Poitou mule recovers quickly and can shine in the sports and leisure competitions it takes part in. 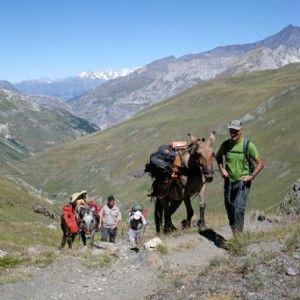 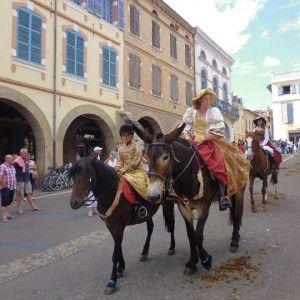 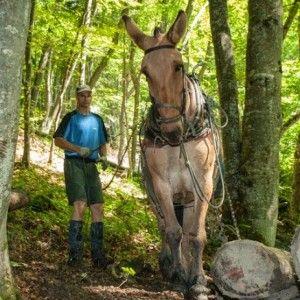 For More information about : Poitou Donkey and Mule Association of Mule Breeds of the Poitou