The Breton horse as it now is results from a lengthy evolution and much selective breeding undertaken by breeders from a base of old varieties of indigenous horse.

There was much cross-breeding in the 18th and 19th centuries in order to improve these, the best-known and most successful being the use of Norfolk stallions imported from England to breed Léon mares. This cross-breeding led to the “Postier Breton” or Breton Post-Horse which is known all over the world. This fame translated into considerable exports between 1900 and the 1940s, to many countries.

Initially bred in the four departments of Brittany and the Loire Atlantique, breeding has now widened well beyond the traditional cradle of the breed. Nowadays, Breton horses are found all over France, and most particularly in the highlands of the Massif Central and in the Pyrenees.

The Breton breed was recognised in 1909.

There are two types of morphology:

– The draft: a compact horse

– The coach horse: longer in the neck, top line and rump, and with a more extended gait 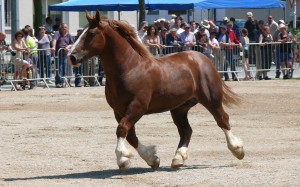 The Breton has an energetic gait and is remarkably docile.

The Breton, most particularly the coach-horse model, makes the ideal leisure driving horse for use as much in competition by skilled professionals as for tourism. 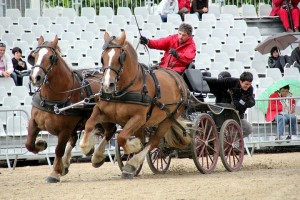 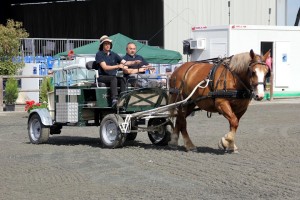 For More information about : Breton Draft