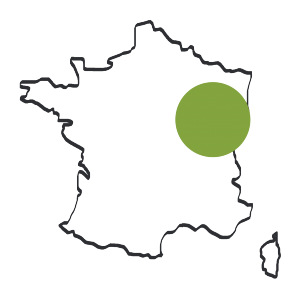 The origins of this ideal draft horse go back to the great “German Breed” imported by the Burgundians in the 5th century. The oriental stallions belonging to the Spaniards who occupied the Franche-Comté region brought it the characteristics which continue to shape the Comtois breed.

Once the principal wealth of its region, the Comtois horse was used to pull carriages, for the cavalry (dragoons), for artillery, and other various draft uses. It then went on to be valued in Switzerland and Italy and was widely requisitioned during the revolutionary wars, the Consulate, the Empire and in 1870. Following that, numbers dropped dangerously and the breed came closed to extinction as a victim of various cross-breedings.

In 1905, breeding became more regular and small bay Ardennais stallions with no socks and no face markings were used.

Originating in the Franche-Comté region, the Comtois breed spread to Alsace, Burgundy, the Massif Central, the Pyrenees and the Alps.

Many horses have been exported to Spain, Belgium, the Netherlands and Germany.

The Comtois breed was recognised in 1919. 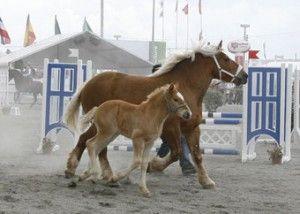 The coat can be bay or, preferably, dark chestnut or coppery chestnut, with a light mane, and a small mark on the head, avoiding large blazes.

A chestnut coat with a red mane, or red roan, or the presence of white tufts in the coat will put the horse outside the breed standard.

A blaze wider than half the width of the muzzle will put the horse outside the breed standard.

The Comtois is now the predominant breed of draft horse in France There are more than 2500 breeders spread out mainly over mountainous zones with harsh climates. More than 800 stallions breed over 9000 mares a year. The direction of the breed selection nowadays happens mainly through breeding competitions.

Its use as a working horse is being strongly developed in areas such as forest logging, work in vineyards etc. With a calm and courageous disposition, a great deal of energy and elegance, it is also increasingly appealing for leisure users and driving competitions.

For More information about : Comtois Draft